27 Oct Why is God So Excited About Rikkyo University?

As a new season begins here at YWAM Tokyo one of the things God has brought to the forefront of our prayers and hearts is Rikkyo University.

With two campuses, one in Ikebukuro- the North West hub of the Tokyo rail system- and the other inNiiza, (where Rachel and I just happen to live) Rikkyo isn’t the biggest university in Tokyo, much less Japan. While it has a long and distinguished history, its profile is considerably less than say that of Waseda or especially Tokyo University. 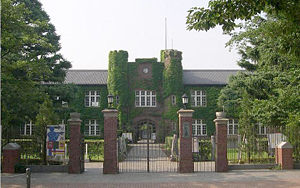 So when God started highlighting Rikkyo I have to admit I was hesitant at first. Why would God want us to focus our effort there instead of say Todai (Short for Tokyo University) or Waseda, which are known for raising up nation-changing students. So I started praying about it and God started sharing his reasons.

The first clue came through a friend and prophetic voice in our community Pete Mahoney. Pete was probably the first to hear from God that our attentions needed to be directed at Rikkyo. As he was researching the University and it’s history God started to highlight one man in particular: Channing Moore Williams.

Channing Moore Williams was one of the first protestant missionaries in Japan.Williams was born in Richmond, Virginia, in 1829, and ordained deacon in 1855. The Episcopal Church sent him to China, where he was ordained priest in 1857. In 1859 he was sent to Nagasaki, Japan, and in 1866 was consecrated Bishop of China and Japan. In 1868 Japan was opened to far greater contact with the West than before, and he determined that he could achieve best results by concentrating his efforts on Japan.

In 1874 (or is that 1877?) Williams went to Tokyo (then called Edo or Yedo), where he founded what is now St Paul’s University a.k.a Rikkyo University. In 1878 he helped unite several mission efforts in the formation of the Nipp0n Sei Ko Kai, the Holy Catholic Church in Japan. In 1889 his health began to fail, and he asked to be relieved. In 1893 a successor was appointed, and Williams stayed on, living in Kyoto and helping to open new mission stations. He returned to America in 1908 and died 2 December 1910. (previous information was provided by justus.anglican.org).

Williams was a pioneer for Jesus and the Kingdom of God in Japan! He founded the university as well as championed unity in the body of Christ. As I have read about Williams one of the points that is consistently brought out about him is that the biggest mark he left wasn’t the university it was the formation of Nippon Sei Ko Kai, or Holy Catholic Church in Japan. He was a living breathing answer to Jesus prayer in John 17 that we would be one as Jesus and the Father are one.

I have shared previously on this blog that I feel like God is highlighting both the universities of Japan and unity within the Church of Japan as areas He wants to radically touch, transform and change in this generation. Williams life is proof that God has long since been planting the seeds of this very thing. Williams was a man who laid down his life and lived in a nation that was not his own and embraced it and adopted it as his own. Embracing God’s vision and heart for a people who had yet to receive revelation of, much less embrace Jesus Christ. He was a champion of the Bride of Christ encouraging and even forging foundations of unity for future generations to build on.

The Anglican Church actually has a day or feast set aside in honor of Williams December 2nd. They also have a prayer for that day.

Almighty and everlasting God, we thank you for your Servants Channing, whom you called to preach the Gospel to the peoples of Asia. Raise up, we pray, in this and every land heralds and evangelists of your kingdom, that your Church may proclaim the unsearchable riches of our Saviour Jesus Christ; who lives and reigns with you and the Holy Spirit, one God, now and for ever.

For decades now this prayer has been lifted up. Let this be a generation that responds like Williams to the heart of God over Asia and especially Japan!

As you go about your week keep this prayer with you lifting it up to God afresh and new. Cry out for God to raise up in Japan and every land heralds and evangelist of the Kingdom of God, That the Bride my proclaim the unsearchable riches of Jesus Christ, The Father and The Holy Spirit.

(Greg Lilley is a fiery one who exhorts, still before the Lord, and willing to surrender for God. He is a husband and a father of two.)